This book was even better than I expected!!! ⁣
⁣
When I saw the cover for THE ONES WE’RE MEANT TO FIND I immediately knew I wanted it, but I sort of thought, from the cover, that I was a beautiful fantasy book. It turned out to be a gripping dystopian that I couldn’t put down and I’m so here for it. ⁣
⁣
I loved all of the elements of the story. A girl who struggled with social interactions. Sisters who were completely different from one another, but who would do anything for each other. A friendly robot. The dangers of climate-change. And a unique futuristic world juxtaposed against a deserted island survival situation. ⁣
⁣

Here’s a quick blurb and synopsis:⁣
One of the most twisty, surprising, engaging page-turner YAs you’ll read this year—We Were Liars meets Black Mirror, with a dash of Studio Ghibli.⁣

Cee awoke on an abandoned island three years ago. With no idea of how she was marooned, she only has a rickety house, an old android, and a single memory: she has a sister, and Cee needs to find her.

STEM prodigy Kasey wants escape from the science and home she once trusted. The eco-city—Earth’s last unpolluted place—is meant to be sanctuary for those commited to planetary protection, but it’s populated by people willing to do anything for refuge, even lie. Now, she’ll have to decide if she’s ready to use science to help humanity, even though it failed the people who mattered most.
⁣
The Ones We’re Meant to Find will be releasing on May 4th and Joan He has a lovely pre-order incentive that includes art cards and a donation on your behalf to OceanConservancy — you should be sure to check it out!⁣
⁣
✨ Thank you FierceReads and NetGalley for sending me a free copy of the book to review.

Upcoming book alert!!! Put this one on your radar!! ⁣
⁣
I loved this book! Nature witches, with magic tied to the different seasons, training at a summer-camp-vibes boarding school for witches plus a reluctant chosen one and sweet romance!!! I’m HERE FOR IT! Plus that cover!! Am I right?!? THE NATURE OF WITCHES by Rachel Griffin comes out in June from Sourcebooks Fire and I can’t wait! ⁣

Here’s a quick blurb: ⁣
Practical Magic meets Twister in this debut contemporary fantasy standalone about heartbreaking power, the terror of our collapsing atmosphere, and the ways we unknowingly change our fate. ⁣ I’ll put the full synopsis at the end of my post! ⁣
⁣
I couldn’t put this book down. I was rooting for the MC and her love interest, and I loved the way it brought attention to the issue of climate-change in a way that felt completely intuitive and never forced so the focus stayed on the story rather than feeling like I was being lectured about an issue. And the ending was immensely satisfying. A total 5 star read. (Thanks NetGalley and Sourcebooks Fire for the free eARC to review). ⭐⭐⭐⭐⭐⁣

SYNOPSIS:
For centuries, witches have maintained the climate, their power from the sun peaking in the season of their birth. But now their control is faltering as the atmosphere becomes more erratic. All hope lies with Clara Densmore, an Everwitch whose rare magic is tied to every season.

In Autumn, Clara wants nothing to do with her power. It’s wild and volatile, and the price of her magic―losing the ones she loves―is too high, despite the need to control the increasingly dangerous weather.

In Winter, the world is on the precipice of disaster. Fires burn, storms rage, and Clara accepts that she’s the only one who can make a difference.

In Spring, she falls for Sang, the witch training her. As her magic grows, so do her feelings, until she’s terrified Sang will be the next one she loses.

In Summer, Clara must choose between her power and her happiness, her duty and the people she loves…before she loses Sang, her magic, and thrusts the world into chaos.

Some books are hard to review, because I love them and don’t know how to put into words all the reasons why…especially without accidentally spoiling anything! Calculated by Nova McBee is one of those books.

This book was gripping and intense but also full of heart. I couldn’t put it down.

Set in Shanghai and Seattle, Calculated is a gritty, modern day blend of the Count of Monte Cristo and Mission Impossible.

She has many names – Octavia, Double 8, Phoenix, Josephine. She’s a math prodigy, a calculating genius and everyone wants her.

In seventeen-year-old Jo River’s complicated world of numbers, there’s no such thing as coincidence. When she is betrayed by someone she loves, kidnapped by the world’s most wanted smuggler, and forced to use her talent to shore up a criminal empire, Jo deems her gift a curse—until she meets Red.

Fellow captive and unlikely sage, Red teaches Jo to harness her true potential, so she can do more than just escape. Before he dies, Red reveals a secret about her enemies and makes her vow to right his wrongs. But Jo has a vow of her own.

With help from Chan, a bitter billionaire, and Kai, his off-limits son, Jo rises into a new role, ready to take down those who ruined her life. Until a mathematical error comes back to haunt her with a threat much more dangerous than the criminals on the loose.

To beat the odds, Jo must decide who she really is and if risking everything is worth it.

After all, history is not made—it’s calculated.

With themes of revenge and forgiveness, loss and identity, brainpower versus brutality, and the triumph of right over might, it will resonate with readers everywhere.

I’ve had trouble finishing the books that I’ve tried to read these past few months. In fact, I’ve put down nearly all of them except for re-reads or heartwarming middle grade books, but Calculated pulled me in from the first chapter and kept me reading until the very end.

I love that it touches on the very real, and important topic of human trafficking, but without being overly graphic or pain-filled in the way it deals with it.

I also love that while the main character is an extraordinary prodigy with an almost magical gift for numbers, she’s still immensely real and relatable, and her voice is engaging. I loved seeing how all the threads of her story came together. While there were some bits that I saw coming, I enjoyed seeing the way that they played out, and this ending was quite satisfying. That said, it also left me anxious to get my hands on book two so I can find out what happens next.

This was a solid five star read for me, and one of my favorite books this year! Thanks to NetGalley for giving me an eARC in exchange for my honest review, and to Nova McBee for gifting me a physical copy (as well as a few beautiful handcrafted goodies, so delightful).

Kingdom of the Wicked by Kerri Maniscalco was a fun, witchy read that kept me turning the pages well past my bedtime! I loved the quick pace, compelling voice, and atmospheric setting!

A quest for vengeance that will unleash Hell itself…

And an intoxicating romance.

Emilia and her twin sister Vittoria are streghe – witches who live secretly among humans, avoiding notice and persecution. One night, Vittoria misses dinner service at the family’s renowned Sicilian restaurant. Emilia soon finds the body of her beloved twin…desecrated beyond belief. Devastated, Emilia sets out to find her sister’s killer and to seek vengeance at any cost-even if it means using dark magic that’s been long forbidden.

Then Emilia meets Wrath, one of the Wicked-princes of Hell she has been warned against in tales since she was a child. Wrath claims to be on Emilia’s side, tasked by his master with solving the series of women’s murders on the island. But when it comes to the Wicked, nothing is as it seems…

Parts of the book were a tiny bit repetitive and predictable, but overall there was great character development and tons of intrigue. I only read book one of Stalking Jack The Ripper (also by Kerri Maniscalco) and didn’t love it, but I enjoyed this a lot more! The ending was intense and I can’t wait for book two! I’d recommend it for fans of witchy contemporary books with unique settings, like Wicked Like A Wildfire, and Winterwood. Thanks Jimmy Patterson Books for the free ARC.

What was the last book that exceeded your expectations?⁣⁣⁣⁣ Love & Gelato  by Jenna Evans Welch has been a favorite of mine since the moment I read it…and now I think I may love LOVE & OLIVES  even more!!! 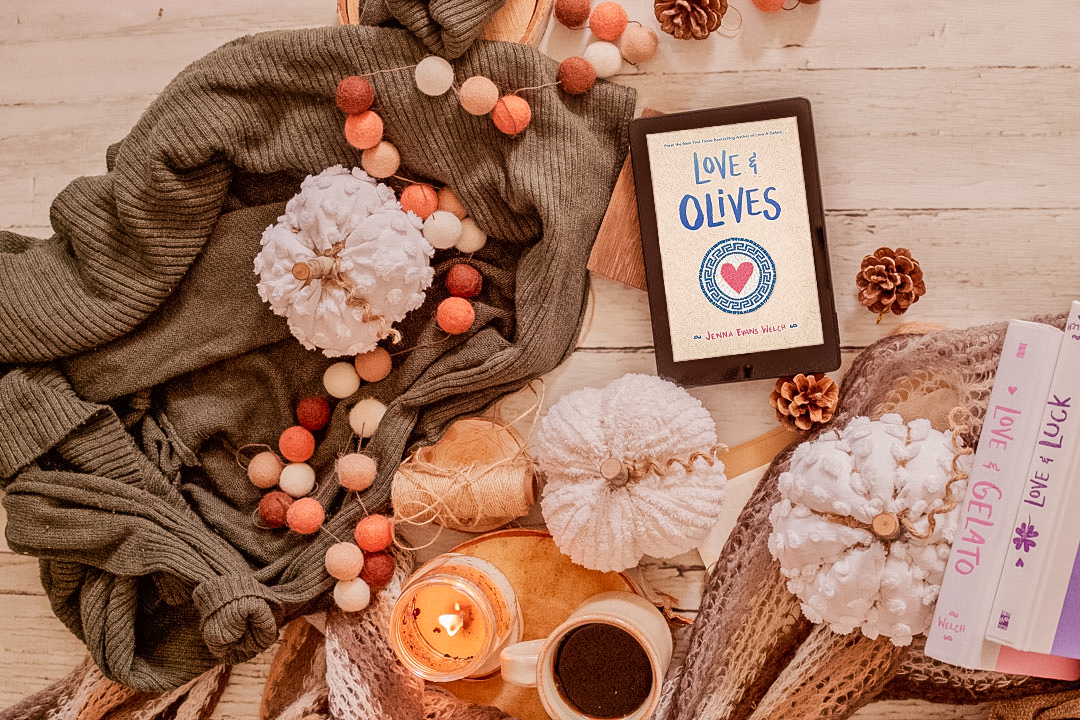 Here’s a quick blurb about it:  “From the New York Times bestselling author of Love & Gelato comes a Mamma Mia–inspired tale about a teen girl finding romance while trying to connect with her absent father in beautiful Santorini, Greece.”  Click here to learn more.

The magical undertone of hunting for Atlantis immediately pulled me in. I couldn’t wait to see if they actually found proof of its existence! ⁣⁣⁣⁣I smiled so many times as the main character’s friendship with the new guy she met in Greece blossomed, and I loved watching her form relationships with everyone there. The complicated father/daughter relationship was written so well, it was nuanced and rich and I truly felt for both of them. I rarely actually cry during books, but there was a moment in this one where real tears were rolling down my cheeks as I read. ⁣⁣⁣⁣

Still, overall it was incredibly heartwarming, and I also LOVED the important mental health topic that was covered in a sensitive, genuine way.⁣⁣⁣⁣

This is also the first book that has filled me with wanderlust for a place that I never even considered wanting to travel to before, but the descriptions of the island of Santorini, Greece were so incredible I found myself longing to go see it in person (and to eat all the delicious food, too). ⁣⁣⁣⁣I couldn’t put it down, and I know this is one that will stick with me for a long time. ⁣⁣⁣⁣

Thanks NetGalley and Simon & Schuster Books for Young Readers for the free eARC to review. ⁣⁣