Today’s game is one of my personal favorites! Small World is a board game where the goal is to take over the world! 😀

At the beginning of the game everyone gets to pick a fantasy race to play as – your  choices include dwarfs, wizards, amazons, etc. that has been randomly paired with one of 20 special powers. Then you try to take as many spots on the board as possible, making strategic choices as to whether you want to take empty spots, or a mountain spot that will be harder for other players to conquer, or attack a spot that already has another player on it.

Once your troops are spread thin, things get really interesting, because you can choose to have your first race “go into decline” (be flipped face down, not longer take new spots, but stay on the board getting you points until someone defeats and removes them) and select a new race with a new power!

There’s a lot of strategy involved, so the youngest my girls have been able to play not  on a team with an adult is eight, which is still on the young side as the game says it’s for ages 10 and up. There are also a LOT of pieces, so this game can be a nightmare to try to play with littles running amok. Which means even though I love it, we rarely play it right now. But we occasionally get a chance to pull it out later at night once Smiles falls asleep. 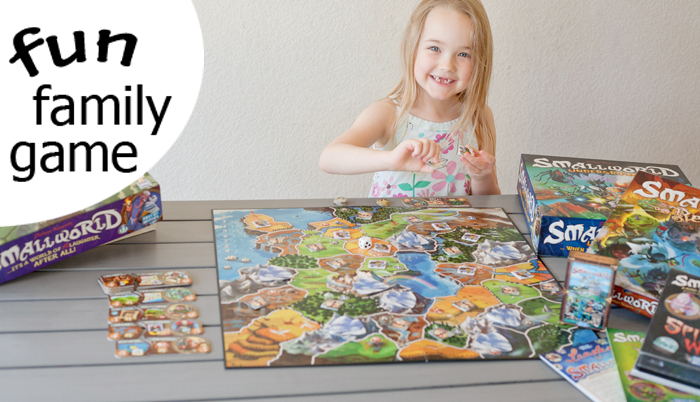 I love the artwork for the game…something about really nice looking pieces adds enjoyment for me. And which set of races you get to choose from at the beginning, as well as which powers they have are different each time, so the game feels fresh every time play, which I really like. And if you fall in love with it like we did, there are a bunch of expansion that add new races and powers, and an underground board to play on and all kinds of awesomesauce goodies!

Be sure to check out the other games I’ve shared!

I plan to share another game we love next Family Fun Friday – which will probably be in 2 weeks, right now I’m alternating with my “Mom Hacks” posts. Sign up to subscribe to my posts via e-mail (there’s a spot on the right sidebar, or below the post if you’re on a mobile device) or follow me on Facebook if you want to be sure not to miss it. 🙂