Armfield Academic Press recently sent my family Getting Started with French for us to review. Artist, my nine year old, has been wanting to learn French for awhile (I’m pretty sure she’s inspired by the last year’s American Girl doll of the year, Grace, who visited France in the first book 🙂 ) so she was really excited about this opportunity.

Getting Started with French is a book written especially for homeschoolers, or anyone who wants to teach themselves to speak French, and is not geared specifically for any particular age, though a younger child would need to be able to read (English) very fluently to go through this on her own, and I felt like it was more the type of book an adult would read and then use to teach a child than something for children to use themselves. In addition to the written book, at gettingstartedwithfrench.com there are MP3 files of a native French speaker pronouncing each of the words in the lessons, as well as MP3 files of author commentary on each lesson. 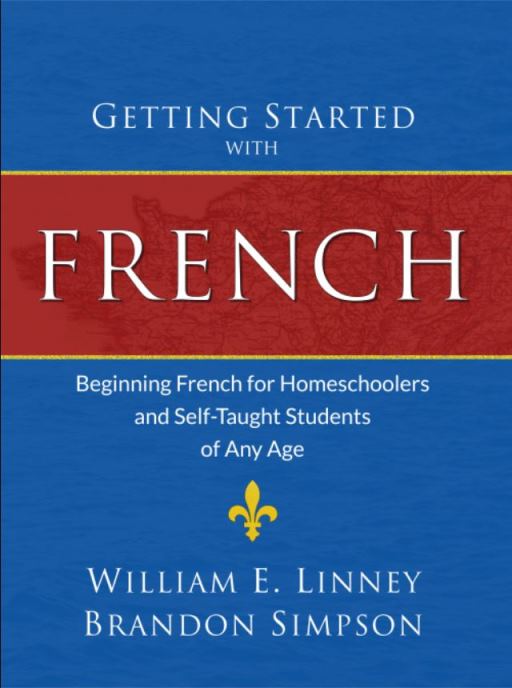 Artist asked me to learn with her so we could talk to each other in French as we go along. The second the book arrived, Artist excitedly ran off with it and read through the first half dozen or so lessons on her own. Once I got the chance to read them myself, I discovered that they were well written and did a great job of explaining what sort of a sound you should try to make when pronouncing words in French, such as the silent letters at the end of many words, or the nasal N.

One thing that the material presents right away is the French R sound, which both Artist and I had a really hard time trying to pronounce. The book explains it well, and the MP3 for the lesson allows us to hear the sound, but we still really struggled, which I’m sure would be the case no matter what when attempting to make a sound that’s so foreign to us. However, the emphasis that was placed on getting it right from the get-go was really discouraging to Artist and she completely lost her motivation to keep trying to learn the language. I had apparently somehow missed the fact that there is author commentary on each lesson available online. Once I realized that and went back and listened to the one for the lesson on the French  R  I did find it to be pretty helpful, so word to the wise, if you’re using this book, don’t forget to check out the commentary!

After Artist became discouraged, I tried calling my Mom for help, since she’d taken French when she was younger (she’s of course still super young). 😉 I’d hoped hearing a woman say the words would be encouraging, because the MP3 files with the lessons are recordings of a man demonstrating the correct pronunciation, and that feels a bit harder for us to try to imitate. One thing we realized while my Mom was helping us out, though, was that perhaps what would actually help us the most would be SEEING someone say the words.

In the author commentary for lesson one, one of the co-authors mentions to the native French speaker that he can tell that his lips are rounded, and I wish I could see  that myself.

I imagine Getting Started with French would be easier to work through if you either had enough familiarity with the language already that the pronunciations didn’t feel completely foreign, or  knew someone who speaks French fluently who you could practice with. That said, I know learning a foreign language is never easy, and I think that probably especially  if you’re teaching yourself  you have to really want to learn  in order to ever master it, and at only $21.95 for the paperback (and $9.99 for the e-book) Getting Started with French is a very cost-effective way to dive in.

Be sure to check out what other reviewers are saying at the Schoolhouse Review Crew link-up!

Getting Started with French