Oy with the poodles already! This pregnancy has really put me through the wringer! From severe constipation (complete with worse hemorrhoids than I ever imagined possible – sorry, but it’s true), to a blotchy face, to constantly waffling between being on the verge of tears and wanting to rip everyone’s head off, to insomnia, exhaustion, and nausea that often only allows me to finish half a cup of coffee before I start feeling sick (and I LOOVE coffee! Ugh!). 🙁

But for the past month and a half or so, possibly the worst (I can’t even believe I’m actually about to say that there’s anything worse than not  drinking coffee) is Restless Leg Syndrome (a.k.a. RLS). I can go to bed ready to pass out the second my head hits my pillow, after walking around in a sleep deprived stupor all day…but 30 seconds after I lie down, my legs, which have apparently developed a mind of their own, insist that I move them, and refuse to just let me be still. They keep me up for hours and hours unable to relax and fall asleep. 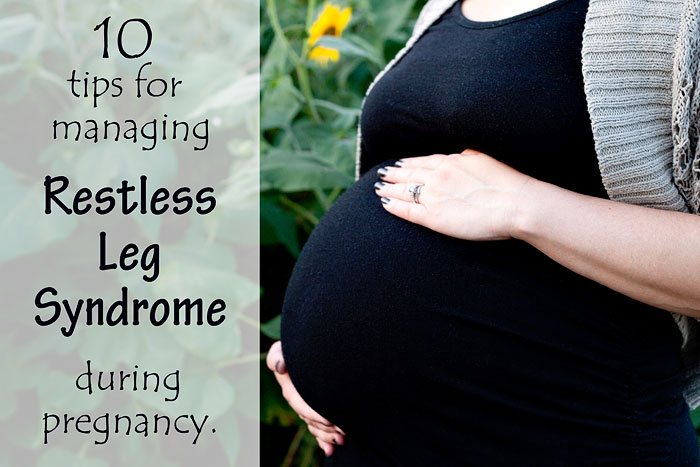 After about the fifth night in a row of being awake more of the night than I was asleep, I decided I could no longer just passively hope to get rest at night and needed to take things into my own hands. RLS isn’t the only culprit, of course – there’s also my snoring husband, clingy co-sleeping toddler, excruciating charlie horses,  needing to pee every 3.9 seconds, plus of course the general lack of ability to get comfortable with a giant belly. 😉

I’ve taken steps to try to diminish as many of the malefactors as possible, but the one that’s been driving me the most insane is RLS, therefore that’s what I’m most obsessed with relieving.

Here are the things that seem to actually help:

1. Soaking in an Epsom Salt bath.  If I were to do nothing else, this is probably the one thing that would make the biggest difference. My personal “recipe” includes plenty of salt, a few drops of lavender essential oil, diffusing a relaxing oil blend such as Stress Away, and turning off all the lights except for my fake candles (I love the idea of candlelight, but not the smoke of burning real ones, plus I’m a klutz and might burn myself).

2. Massaging with PanAway.  It’s an essential oil blend of Wintergreen, Helichrysum, Clove, and Peppermint. I put it in a small pump bottle diluted with fractionated coconut oil and massage my calves with it before bed, and again as needed throughout the night. It’s also my biggest saving grace when I feel a charlie horse threatening. If I can massage the area with PanAway in time, it keeps my muscles from cramping up.

3. Taking a Calcium and Magnesium supplement. I’ve found a liquid supplement, taken before bed, works best for me.

4. Taking a (gentle on the stomach) Iron Supplement. As a note…you should totally check with your Dr. before adding supplements to you diet, especially when pregnant. I tend to be anemic so my OB encouraged me to add iron to my diet. I first tried just eating more iron rich foods, because I’ve already been struggling with the worst constipation ever, but he recommended going ahead and adding a supplement, and when I read that iron supplementation has benefits for RLS symptoms I finally gave in and started taking some.
— I also take additional Folic Acid and a deficiency of that can contribute to RLS, too…just fyi.  🙂

5. Exercising – a bit. OK, I can’t honestly tell all that much whether it really makes much of a difference how active I am during the day beyond the typical chasing and cleaning up after three kids, plus third trimester nesting insanity…but I try to take the kids on walks when I can, or do some Just Dance on the Wii. Not too much, though. I can definitely tell when I’ve overdone it because then I have more trouble with leg cramps during the night….so, yeah.

6. Stretching. I’ve started stretching my calves when I’m relaxing in the bath and it definitely helps. 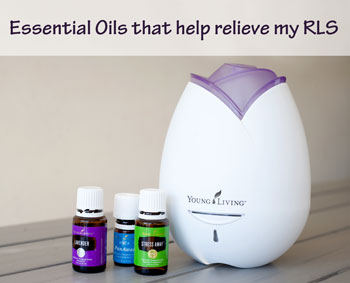 7. Applying Lavender essential oil. RLS  is a sleep related disorder, so anything that can improve sleep is also a good idea. I put undiluted lavender oil on my neck, writs, and behind my ears just before lying down, and again during the night if I’m wide awake. (Also, I recently read an article about How to Grow Lavender  in case any of you want to make your own oils, or bath bombs, or anything, with fresh lavender. )

8. Diffusing relaxing essential oils. I’ve started moving my diffuser to my bedroom at night. Misteris isn’t a big fan of lavender so I don’t often diffuse it. I typically stick with my go-to relaxation blend, Stress Away, though I’ve just ordered some Gentle Baby to try as well.

9. Consuming cinnamon. This one is difficult to tell for sure if it actually does anything, but cinnamon is supposed to help regulate blood sugar, and blood sugar crashing can be a cause of insomnia. Plus I like an excuse to eat a couple cinnamon candies (with cinnamon oil) during the day. 😉
– In all seriousness, this is an awesome warm milk and cinnamon drink that’s relaxing to have before bed.

10. Keeping my Kindle handy. If all else fails, my Kindle is (almost) always charged and ready on my bedside table. I used to think if I was lying awake in bed I’d just browse Facebook or something mindless on my phone for a few minutes rather than getting involved in a book that I might not want to put down, but the light from my phone actually makes me more awake, and I can read a book in night mode without having that problem. Even if I do accidentally get caught up in a good book, it’s still a lot less torturous than just tossing and turning for hours unable to sleep.

Bonus tips: I put a nightlight in my bathroom so I don’t have to turn on the light every time I get up to pee, and started using the new nursing pillow I ordered from Blessed Nest to support my tummy, which is working way better than any of the giant pregnancy pillows I’ve tried.

Edited to add – My sister is pregnant now and RLS has been a problem for her, too! She said a number of these tips helped her, especially the oils, and also her midwife recommended she take a turmeric supplement  and that helped, too! 😀

I’ve found if I do ALL THE THINGS every day I’m able to sleep much  better at night and have significantly less trouble with RLS…most of the time. That is, if I miraculously don’t’ have to get up to pee every 2 seconds, and my skin isn’t too itchy, Apple isn’t crushing my lungs too much, and the moon’s not full…but whatever. I actually had like three nights in a row of pretty good sleep. It was practically a miracle.

What is, or was, your worst sleep disrupter during pregnancy? I’d LOVE to hear any sleep tips you have! I’m so tired of being exhausted (Wah-wah-wah. Aren’t I *punny?* Yeah ok, sorry…I’m just gonna go drink some coffee now.) 😉

10 tips for Managing RLS during Pregnancy

14 thoughts on “10 tips for Managing RLS during Pregnancy”