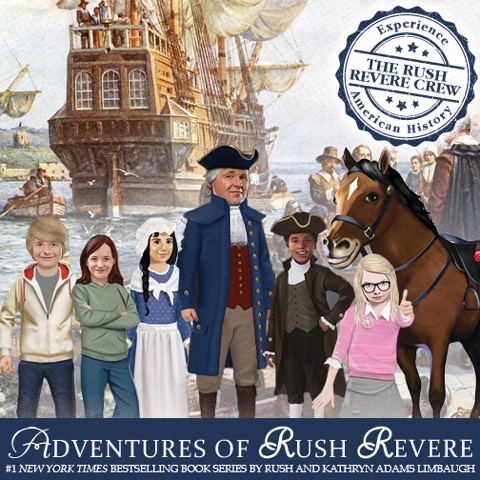 We had actually already purchased the first book years ago, and my daughters enjoyed it fairly well. I didn’t think they really loved  it, but when the full set arrived my ten year old was chomping at the bit for me open the package so she could run off to her room with the books and start reading. Any education books that are enough of a fun read that she wants to read them without being assigned to do so are a win as far as I’m concerned. I’m slowly working through reading these out-loud to my seven year old, and she seems to be enjoying them, too. 🙂

Each book also includes frequent pages with relevant pictures. For instance, in Rush Revere and the Brave Pilgrims  that begins with the Pilgrims getting ready to sail to America, and takes you all the way through the first Thanksgiving, there are paintings of important figures like William Bradford and Myles Standish, illustrations of the Mayflower, pictures of items like compasses and portable telescopes, sketches of Native Americans visiting the Pilgrims at Plymouth Colony, and much more.

We haven’t gotten to books two through five yet, but I perused each one briefly. Rush Revere and First Patriots  picks up in Boston in 1765 with the Colonists beginning to rebel against taxation without representation. It introduces you to Benjamin Franklin and teaches about the Stamp Act. You meet quite a few other historical figures including Patrick Henry, Samuel Adams, and of course George Washington, travel to Windsor Castle in England and meet King George III, learn about the Boston Massacre, spend some time with Paul Revere, and ends just after the First Continental Congress in 1774.

Rush Revere and the American Revolution,  picks up right where book two left off, just before the midnight ride of Paul Revere and takes you through the signing of the Declaration of Independence in 1776. In Rush Revere and the Star-Spangled Banner  Rush and friends travel to just over a decade later, to the Independence Hall in Philadelphia in 1787. This book actually spends significantly more time in the present than the others, as Rush Revere takes a few of his students that have been adventuring with him on a tour of Washington D.C. and shares information about important buildings and documents there, including of course the U.S. Constitution. This book focuses quite a bit on the Constitution and the Bill of Rights. It also teaches about the three branches of the U.S. government. Finally, Rush and friends travel back in time to 1814 to meet Francis Scott Key on the night that he pens the national anthem.

In the final book, Rush Revere and the Presidency,  we find Rush’s history students in the middle of student body elections, and traveling back in time several times to see President Gorge Washington, President John Adams, and President Thomas Jefferson. It teaches about elections, presidential terms, Secret Service, political parties, the road to becoming President today, the Electoral College, and more.

In addition to the books themselves, there are also a plethora of resources online at rushrevere.com including activities, challenges, quizzes and games. There’s also an entire section for homeschoolers with study guides and other resources.

All in all, this is a neat set of educational books and my girls enjoy them. Be sure to hop over to the Homeschool Review Crew link-up to see what other reviewers have to say. 🙂