Now, this is a story all about how a ring got lost, then showed back up…or something…yeah. 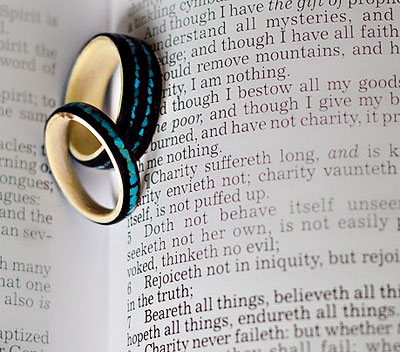 So last Friday, Misteris was mowing the lawn because he’s awesome like that, and when he had to add more gasoline to the mower, he put his ring in his back pocket so it wouldn’t get dirty. Now, he’s been putting his ring there when he takes it off for over 10 years with nary a problem. But you see, we gave each other new rings for our 10th anniversary in May, and they’ve proven to be slippery little buggers.

A few days after we got them, I was at a writers conference where I lost my ring in the bathroom while washing my hands. I panicked moments later when I noticed it missing, went back to the bathroom where the awesome janitor who was cleaning the bathroom helped me look through the trash and we found it inside a paper towel.  Another time, Misteris was holding it for me while I was rubbing salve on Smile’s skin to help her eczema and he somehow lost it, something to do with a kid puking or some such…fortunately we found it after about half an hour of searching the house.

Anyhoo, on Friday when Misteris finished mowing and checked his pants, the ring was missing. I double checked to make sure it wasn’t hiding in his pocket, then we both searched the yard to no avail. Eventually, Misteris deemed it a lost cause and we slunched inside. (Slunch = slump + hunch) 🙂

I never fully lost hope, though. I prayed it would miraculously show back up, and kept looking outside expecting to see a bird find it in the yard and fly up to the window where it would tap lightly to get my attention and then set it in my hands when I went out.

Alas, no birds ever came. But Monday morning, something exciting did  happen. I found the lost ring sitting just inside the dryer!!! (By “found” I mean, I looked down and there it was.)

So I know what you’re thinking. How in the world did you guys both miss the ring in the pants pocket? That just doesn’t make any sense at all. And I agree. It doesn’t. Which is why I’m convinced that can’t have been what happened. I’m pretty sure there’s a much better explanation. 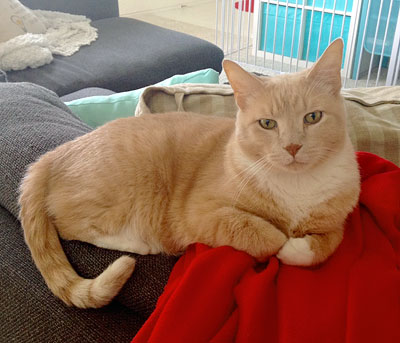 Our cat, Dash, must have overheard talk of our troubles and determined to help out. He began keeping an eye out for an opportunity to dart into the backyard and search for the ring himself, having the obvious advantages of cat eyesight, and a much closer to the ground vantage point.

He thought he’d found his chance on Saturday when friends were here and the kids kept running in and out and forgetting to close the door. Misteris, however, saw Dash eyeing the door and closed him in another room.

Frustrated but not defeated, Dash continued watching and waiting for his chance. Luckily, the very next night, as we were all caught up in the excitement of the eclipse, the door was several times left not only wide open, but also thoroughly un-watched.

True to his name, he dashed out into the yard and raced about searching for the ring until he found it! 🙂

He darted back inside with the ring and placed it in front of his water bowl, knowing Misteris would refresh it the next morning, see the ring, and praise Dash for his heroic efforts. Unfortunately, Misteris was thoroughly exhausted from our long weekend the next morning and stumbled off to work without attending to the cats’ water. When I got up and noticed the cats trying to drink water from the kitchen sink, I was exhausted as well and rather than actually go refill their bowl I simply set a small dish of water out for them in the kitchen.

Dismayed at the lack of our discovery of the ring and subsequent lavishing of praises upon Dash that he expected, Dash shuffled off and retrieved the ring himself. As he was searching for the perfect, super obvious, no way I could miss it, spot to place the ring, I became distracted while doing laundry and left the dryer open. He jumped up into the dryer and carefully placed the ring at the very edge where surely I would see it.

Finally, his plan worked! I “found” the ring. My first thought was that I must have washed it, and my second thought was to contact Misteris and share the awesome news. So poor Dash still didn’t receive the praise he most certainly deserved. Fortunately for Dash, as I considered the events later I realized what must have happened. After all, in the entire decade we’ve known him, he’s never before jumped into the dryer, so what other explanation could there possibly be.

Thanks Dash. You may sometimes be lazy, stubborn, and even crotchety, but finding that ring was super awesome of you! And thanks, God, for the miracle of getting our ring back…after all, that much of the story is 100% true. Not that the part about Dash has any chance of not being accurate or anything. 😉

the ring came back