Sooooooo…..first of all, thank you for the super-mega-awesome response to my previous post! You guys all rock socks!!!!

And now I’m about to do something weird for me. I started this blog to let you know that we’re messy and real, and don’t live Pinterest-worthy lives. Not even close. So sharing tips and stuff typically isn’t my thing. BUT…when friends come over, they often ask me what’s up with the jar of blue strips on my counter. So I thought I’d share the little story of how I fixed our T.V. problem.

After Smiles was born, our T.V. watching got a little out of control. Then we moved when she was 4 months old, and with the packing and unpacking and whatnot, we got rather set in our ways before I had the energy to try to address it. 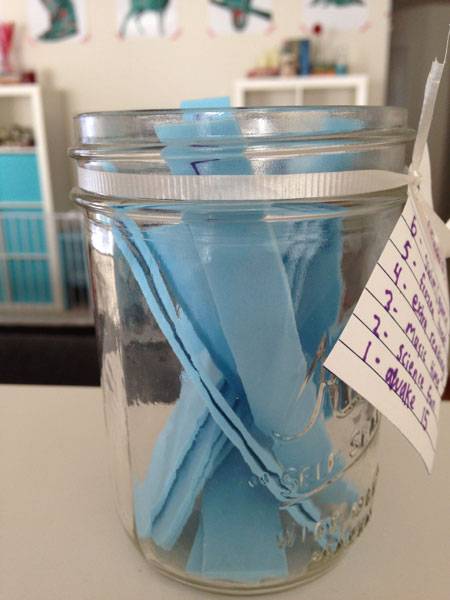 I finally sat down one day with Artist and Boo to brainstorm. I asked them how many shows a day they thought they should watch, and I threw out how many I thought they should. Then we got to work trying to find a solution. I really wanted to find a way that they would want to watch less T.V. rather than me forcing that on them. So we devised the “strip system.” 😉

I chose the max number of 22 minute shows a day that I could live with. For me it was 6. (Hold back the judgement that I know some of you are dying to throw at me for just a second, please.)

I took a sheet of foam paper and cut 6 strips for each girl, wrote their initial on their strips, and established a rule that you had to take a strip out of the jar to watch a show. Then I added the incentives. At the end of the day, for every strip left in the jar they would get some sort of reward. They helped me come up with these. If they watched ZERO shows all day and had all 6 strips left, we would either play a game as a family or go swimming (this was at the beginning of summer).  5 strips earned them ice cream, and so on.

And it worked amazingly. You wouldn’t believe the number of times they chose to not watch any T.V. at all so they could get the reward. 🙂

Now, honestly, they’ve mostly lost interest in it at this point. I think we need to sit down and come up with some new rewards. But they’re at least out of the habit of watching so much T.V.

Whew…did you guys make it through that? I promise not to write any other posts like this for a long time. Probably. Unless I come up with something awesome, which is highly unlikely. Though you never know what could happen if you drink enough coffee, and I hear cup number four calling my name. 😉