Aloha. ‘Tis day 1 of Momming 4 girls without my husband home. Apple is 3 weeks old today — which also means I’m 3 weeks out from c-section #4 + tubes tied, and the recovery process has been harder than prior times. My awesome Mom has offered to come to town and help if I need her, but I’m hopeful that with the assistance of my 2 eldest I’ll be able to manage. I guess we’ll see…

Anyhoo, I decided it would be fun — or at least distracting or something, to blog my day. 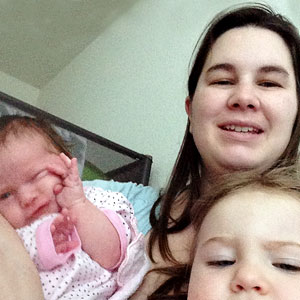 Last night by the time I finally got Apple fed and burped and changed, and then, because she woke up apparently hungry again, fed and burped and changed again, and then again, and finally rocked to sleep with a clean diaper so she and I could go to bed, it was midnight. When she woke up hungry again at 2am, I was super glad we co-sleep and I didn’t have to get up to nurse her. But at 4:30 she had gas and was crying so I had to get up with her, and ended up having to stay up with her till 6am. One hour later Smiles, who still likes lots of TLC, woke up and needed Mommy cuddles, then she wiggled and squirmed and got in and out of my bed for the next 45 minutes till she woke Apple and I had to get up. So…yeah…starting the day with just over 4 hours of sleep – ready of not here we go! 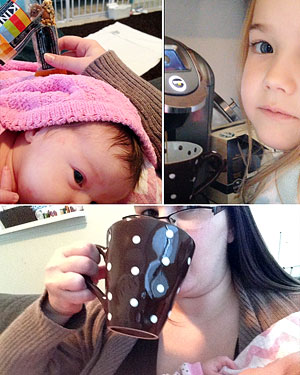 Fortunately my awesome husband prepped as much as possible for the day, including setting out mini-donuts and plates on the table for the girls’ breakfast, stocking our fridge full of lunchables, and getting a bunch of snack sized junk foods so the girls can feed themselves all day. (We’ll worry about being healthy later.) 😉

While I sat on the couch nursing Apple, Artist brought me a granola bar and milk, and then Boo made me coffee! Yay!

Hour two = I’ve just realized this day is going to be super long.

I set down a sound asleep Apple only for her to wake up immediately because, of course. Made myself a second cup of coffee. While Apple was awake-but-not-yet-crying I blogged the first bit of this post. Then Smiles brought some magna-tiles to me, and Apple started crying, so I sat on the floor holding my baby while building a pony palace out of magna-tiles for half an hour. Despite the fact that it’s still only 9:30 in the morning, I let the girls start in on junk food to distract Smiles, because holding Apple in one arm while sitting on the floor was becoming uncomfortable.

Hours three & four = apparently it is my circus and these are my monkeys. 🙁

Oy with the poodles already.

So yeah, I got a little blogging done (jotting stuff here, plus working on a review post for next week) and I thought, “OK this isn’t so bad,” which was my first mistake.

Smiles hit her head (not like concussion level, but she needed comfort) and Apple woke hungry and screaming. I decided to nurse her outside because Smiles always loves me to be outside with her. I felt like a pretty awesome Mom for all of 12.8765 minutes.

Then Apple started screaming again so I took her inside. She kept screaming. And screaming. I finally got her calm and asleep just in time for the other three to come crashing inside with random petty complaints they all had to voice loudly to me, waking Apple. I told my oldest 2 to go play in their room, which apparently was somehow seen as a punishment, and made them mad. Smiles’ shirt was wet from playing with the water table outside so I took it off of her, which made her mad, too. So, hey, at least no one was left out from being mad. Yay.

I finally decided 11:20 was late enough in the day for lunch because I needed something to cheer everybody up.

Lunchables to the rescue. Hello blissful half hour in which the children ate and watched TV and I retreated to the office/school room to get Apple back to sleep in peace and quiet (while eating a lunchable myself cause it was just the easiest thing to grab). Then Smiles came and squeezed her way into my lap with Smiles so I held them both for half an hour. Pretty much impossible to do anything…and not very comfortable for me…but at least no one was screaming. 🙂 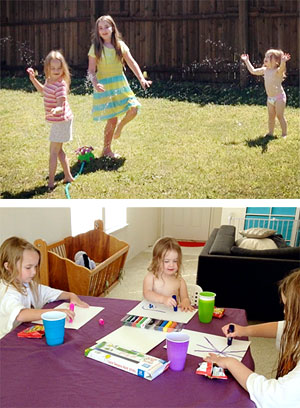 Hours six through eight = mundane, not so different than normal days.

We had quiet times for 2 oldest, snacks, vegging together in front of the TV (and drinking iced coffee — not the girls, just me 😉 ) while Apple napped in her cradle, and a short time of housework. Then the oldest 3 played out in the sprinkler…a big win other than the yellow jacket that got in when the door was open. UGH! I hate flying pests! I literally  have nightmares about them. But I managed to kill it. Go me. I folded a little laundry. Stayed on my feet a little too much. Started feeling a little unwell.  Determined to do my best to take it easier for the rest of the day.

I set the table with Kwik Stix and paper for the girls to make art, plus individual bags of animal cookies for a snack and called the girls in before they got sunburns. They colored quietly and happily till a neighborhood friend came over, then they put away the art supplies and retired to the girls’ room to play! 😀 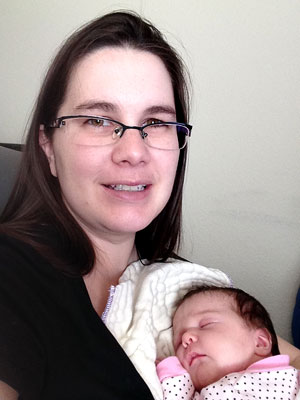 Almost there! But apparently it would be too easy for the last hour to not  be a struggle. Boo’s arm got hurt, Smiles really  missed her Daddy, and I got impatient and kept checking the find my phone app to see how close he was, which wasn’t really helpful…watched pots and some such.

And…I made it! All in all the day was less difficult than I’d imagined. In fact, despite the fact that I’m recovering more slowly this time, and I now have one additional kiddo, it was an easier day that my first days home alone after Smiles was born. Also, I’m obviously aware that we didn’t do any school…a great thing about homeschool is our ability to make our own schedule, so we can be on break now and do school during the summer instead. 🙂

Anyhoo…it’s now Tuesday morning, and we’re doing it all over again. I woke up less tired than yesterday morning and not in any extra pain from slightly over-doing it, so yay! I jotted this post in bits and pieces throughout the day yesterday, and have not really gone through to proof and/or polish it, but this is one of those posts that is pretty much just for me, anyway….I’m aware that it’s long and rambly and not likely to really be of interest to anyone, and I’m ok with that. I hope you guys are all doing great….if you actually read this whole thing, well go you, you rock socks! And now I really  need more coffee. Later gators! 🙂

At Home with Four Kids under Nine

2 thoughts on “At Home with Four Kids under Nine”